Five Alarm Funk is the kind of band you have to get out on the dance floor to appreciate. Picture eight guys dressed in wacky costumes like vintage running shorts, a gorilla costume, and a hard hat. They are squeezed onto the stage, ripping out horn and percussion-driven Afro funk jams while performing a mix of choreographed and unscripted moves. You can imagine the outrageous dance party atmosphere they generate. No wonder they are one of the most popular high energy live performance groups out there.

Don’t be fooled by the name; there’s more to Five Alarm Funk than, well, funk. Just ask drummer Tayo Branston, who says that, although they are rooted in the style that gives the outfit its name, he and his bandmates thrive on being able to transcend that genre by seamlessly mixing in elements of Gypsy rock, Latin music, ska, and even prog-metal. “I would say that it’s intense, passionate, and fun, genre-spanning music that really anybody can get on board with,” Tayo says. “It’s got such an array of different sounds, and you can tell that each player has his own individual take and input into each track.” Need proof? Take a listen to any of Five Alarm Funk’s five studio albums, which include Anything Is Possible (winner of Instrumental Album of the Year at the 2011 Western Canadian Music Awards), Rock the Sky (which was nominated for Instrumental Recording of the Year at the 2013 WCMAs and Instrumental Album of the Year at that year’s Juno Awards) and their 5th studio album, Abandon Earth (winner of Instrumental Recording of the Year at the 2015 WCMAs). 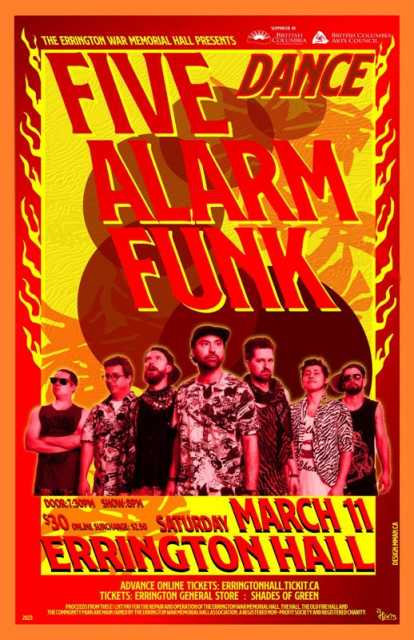 Tickets are $30 at Shades of Green, Errington Store, and $32.50 online at https://ErringtonHall.Tickit.ca.
Kids ages 6 to 12 are $5 at the door; free under age 6.
Home baked goodies, ginger tea and Creekmore’s coffee are available from the kitchen.
Info: http://www.ErringtonHall.ca