The Wardens stories and mountain music rise from the very land they’ve protected as Canadian national park wardens collectively for over 50 years. A Banff area trio, their original songs are rooted in a “story telling” style reflecting their firsthand experience working as National Park Wardens in the Canadian Rocky Mountains. These guys are the “real meal deal” as accomplished musicians, performers and songwriters. The Wardens are truly a cultural treasure.

The band have performed widely across western Canada and in the US from Alaska to California. They’ve shared the stage with Blue Rodeo, Pharis & Jason Romero and Ian Tyson and performed at Folk Alliance International, Canmore Folk Festival’s main stage and for a royal audience in Edmonton, Alberta.

A national park warden for over 30 years in Banff National Park, Scott’s music stems from a life lived in the deep wilderness of the Canadian Rockies as a horseman, search-and-rescue dog handler and technical alpine specialist.

Scott was awarded the Governor General’ s Award for Exemplary Service as a Peace Officer.

Ray founded The Wardens in 2009 with Scott Ward during the national park warden centennial after discovering the rich depth of music and stories within this region of Canada.

Translating the high lonesome sound of the Kentucky hills to those of the Rocky Mountains, Ray’s vocals amplify the spirit of The Wardens’ Mountain music. He has studied the upright bass with Missy Raines and mandolin under John Reischman. In 2021 he was nominated Traditional Singer of the Year for the Canadian Folk Music Awards.

Posted in Jasper National Park, Ray has worked in a number of parks including Banff, Glacier and Mount Revelstoke. He is currently working with grizzly bears and the abundance of wildlife that abounds in Jasper.

SCOTT DUNCAN
Scott Duncan has played fiddle on stage with the band since 2017 and his work is featured on the album Sold Out at the Ironwood.
If you’ve seen The Wardens in concert anytime from 2017 on, there’s a good chance Scott Duncan was with them. He’s a sought after touring musician, working with John Wort Hannam Music, Samson’s Delilah and his own project Delta Whiskey. But he likes joining The Wardens on the road so much that he makes every effort to be there when he’s needed. He is their journeyman musician, our ace-in-the-hole, our studio marksman. Scott Duncan is their Deputy Warden! 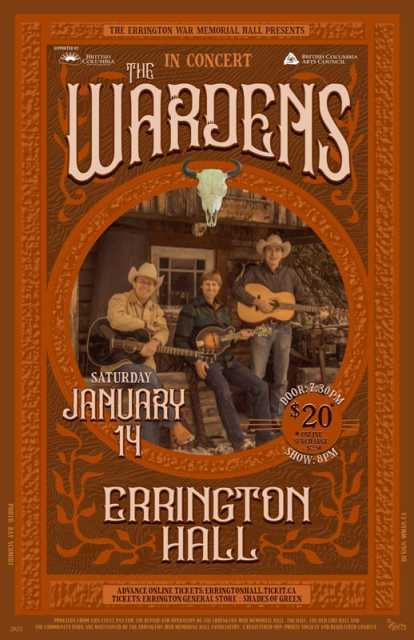 Tickets are $20 at Shades of Green, Errington Store, and $22.50 online at https://ErringtonHall.Tickit.ca.
Kids ages 6 to 12 are $5 at the door; free under age 6.
Home baked goodies, ginger tea and Creekmore’s coffee are available from the kitchen.
Info: http://www.ErringtonHall.ca